Once some of the ground rules of music theory are in place it becomes more enjoyable and rewarding to find sounds on the guitar and even explore the unique expressions that can be found in open and alternate tunings. In this site we try to put some of the fundamental techniques in place.

Building basic guitar knowledge - The more you understand, the more you can express.

The acoustic guitar has been around for several centuries, however it was not until the 1920's guitarist's first began to experiment with electrifying their instrument in search of a louder sound.

And it was not until 1950 that Leo Fender first successfully mass-produced and sold electric guitars followed by Gibson in 1952. Today there are a wide range of guitar designs and styles. However the original guitar designs from the fifties still have a hold on this retro driven industry, as do some of the early guitar icons. 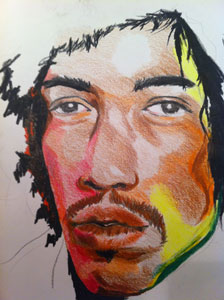 Jimi Hendrix has to be noted for his iconic status. He played a revolutionary strain of blues through the newly arrived Marshall 100 watt valve amp where gain, distortion and feedback were key elements to this sound. He did on occasions pull out the acoustic, tuned down 2 tones, and produce classic tracks like Here my train a'coming. From Voodoo chile to Wind cries Mary, he most definitely reached into all corners of the honeypot of creativity!

In recent years technology has been taking giant steps in certain areas, for example mobile phones, but the guitar manages to maintain its aloofness to change. Presently there seems to be a sign of some technological advancement, most significantly with virtual sound modelling and self-tuning systems. Virtual sound modelling is digital replication of sound and may not be to everyone’s taste. However if a guitar can tune itself in seconds, not only does this make being in tune a foregone conclusion it creates the ability to quickly and easily change tunings.

Play as you want to

There is no turning back